Efforts are underway throughout the U.S. to update the interconnection process to alleviate stresses on application queues and efficiently secure new energy generation systems on the grid. With modernization underway, now is the time for renewable generators looking to interconnect to start assembling their key teams to effectively embrace these changes and execute the right plans.

The passage of the Inflation Reduction Act (IRA) marks a defining moment of turning toward accelerated adoption of renewable energy in the United States. Tremendous strides in renewable energy generation investment have already been made, notably the advancement of solar power generating capacity. Over the last 10 years, solar capacity has eclipsed previous market investment as it has grown more than 2,000% over 2001-11. Similarly, wind power capacity more than doubled during the same period. Before the IRA was even proposed, the U.S. Energy Information Administration (EIA) was projecting that 42% of the country’s energy would come from traditional renewable energy resources by 2050. The passage of this legislation is sure to change that figure.

The passage of the Inflation Reduction Act (IRA) marks a defining moment of turning toward accelerated adoption of renewable energy in the United States. Tremendous strides in renewable energy generation investment have already been made, notably the advancement of solar power generating capacity. Over the last 10 years, solar capacity has eclipsed previous market investment as it has grown more than 2,000% over 2001-11. Similarly, wind power capacity more than doubled during the same period. Before the IRA was even proposed, the U.S. Energy Information Administration (EIA) was projecting that 42% of the country’s energy would come from traditional renewable energy resources by 2050. The passage of this legislation is sure to change that figure.

The improved economic forecasts along with social demands will create plenty of opportunity for accelerating growth in the renewable energy sector. However, the same advancement of renewable energy generation that the IRA aims to incentivize will be limited by outdated processes governing the interconnection of these assets onto the grid. Already, transmission operators are struggling to work through interconnection queues that have reached record backlog, as detailed in the Lawrence Berkeley National Laboratory report. 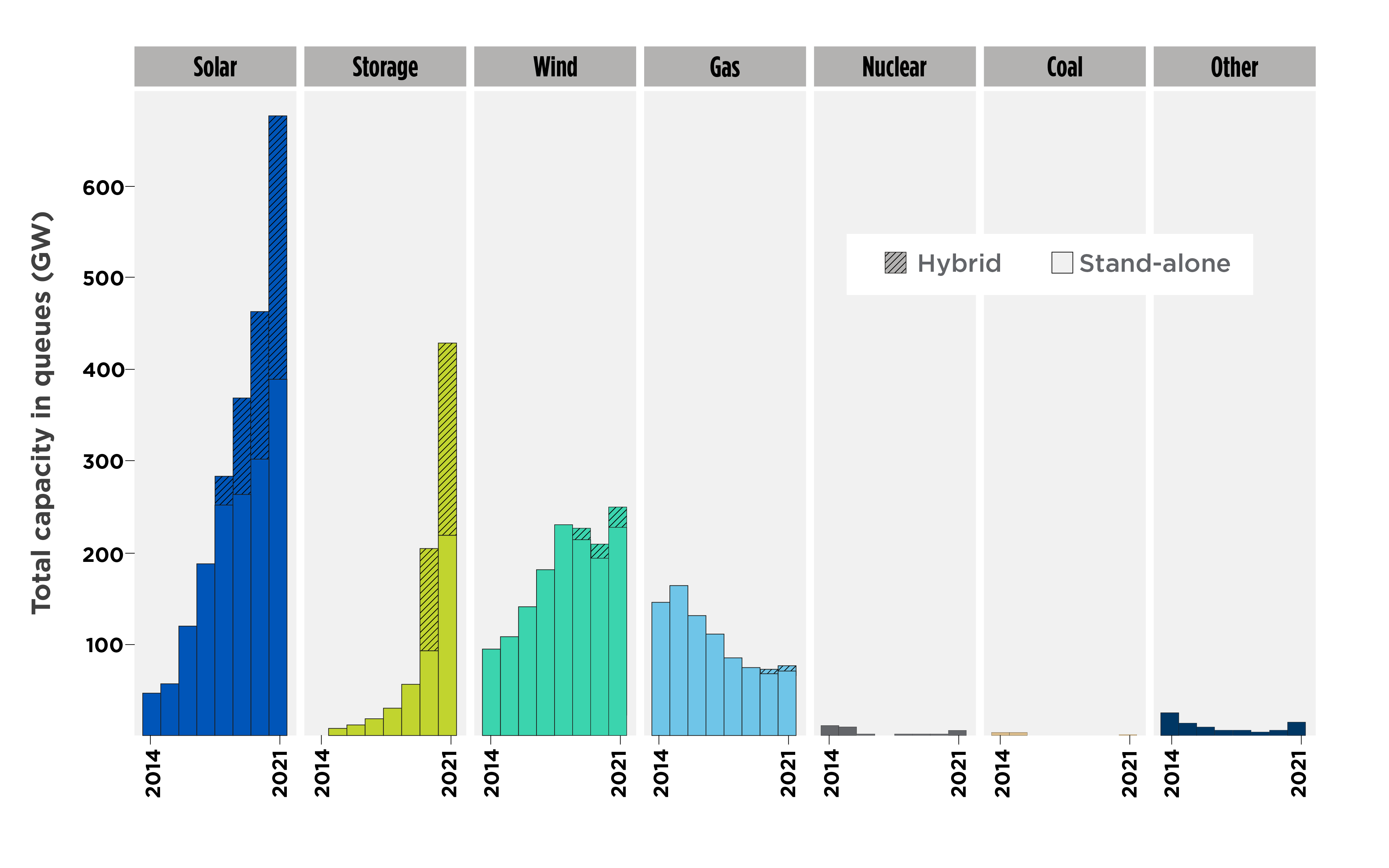 Figure 2: Capacity in interconnection queues at year-end 2021. (Note: Hybrid storage capacity is estimated in some cases using storage:generator ratios from projects that provide separate capacity data. Storage capacity in hybrids was not estimated for years prior to 2020.) Source: Lawrence Berkeley National Laboratory.

Regulators and policymakers are aware of this bottleneck and have introduced policy reforms to alleviate the current gridlock and accelerate connecting all new generation — including renewable energy — to the grid. Their hope is that by streamlining the interconnection process, commercially viable projects will be processed faster, opening additional opportunities for new, cleaner generation.

The current interconnection process stems from the legacy of bringing large, centralized fossil generation power to the grid. This legacy generation was able to connect to the grid from fewer locations, enabling fewer transmission constraints and driving a policy that modeled each project on a generator-by-generator basis. The significant investment and depreciable accounting of these projects and the associated network upgrades meant that the policy was also designed to be more equitably allocated among participants and developers.

As the U.S. electrical generation mix diversified in the early 2000s, the gaps in the policy started to show. Namely, it did not adequately account for the type and size of resources applying for new interconnections onto the grid. Those limitations still linger as the interconnection process does not properly evaluate solar, wind and storage assets and how these generation mixes operate on the grid. While improvements to evaluate renewable capacity appropriately have been made in prior years, such as the introduction of FERC Orders 845 and 888, there are still shortcomings. Still, other factors may cause projects already in advanced stages of the queue to drop out, resulting in further system planning rework and essentially restarting the process. These complex dynamics have created a bottleneck of predominantly renewable generation projects coming online, which has stifled the intention of energizing these fast-moving projects to replace aging fossil generation.

As renewable generation becomes a significant part of energy production mix, having an efficient process that brings new generation projects online quicker and more equitably is key to the changing energy landscape. Serious grid implications have resulted from the increased time it takes for projects to go from concept development to commercial operation. Independent system operators (ISOs) are forced to reevaluate their legacy generation retirement plans to maintain a reliable grid and sufficient dispatchable generation capacity.

In June 2022, FERC issued a Notice of Proposed Rulemaking (NOPR) to address the interconnection processes. Acknowledging the impact of renewables on the nation’s energy mix, FERC released a plan to streamline the evaluation process for shovel-ready projects, reducing the queue gridlock and helping renewable generation come online faster.

The proposed rule attempts to address long-hoped-for updates and is expected to start easing the interconnection queue mainly through the following mechanisms:

While this proposal moves through the FERC rulemaking process, PJM and MISO have already moved forward to address the bottlenecking in the interconnection queue. PJM is implementing a first-ready, first served process while MISO is reforming its definitive planning phase (DPP) process, which already was approved by FERC in January 2022.

The PJM Interconnection regulates wholesale power markets across 13 states — stretching from Washington, D.C., to Illinois — and is working on aggressive measures to reform its renewable energy development process. With more than 89,000 MW  of solar generation alone in its interconnection queue, PJM has started a two-year freeze on new interconnection applications.

PJM has been exploring a new, more efficient interconnection process during this two-year window while also striving to fast-track the review process on about 450 applications currently in the queue.

The Midcontinent ISO (MISO) has been working on interconnection queue reform since 2008. With more than 700 active projects in its queue, totaling almost 110 GW of capacity, MISO has undertaken even more aggressive process changes to reduce its timeline for interconnection from 505 days to 373 days.

To process project applications in less than a year, MISO has defined two path options based on the required network upgrade facility study (NUFS) process. Path 1 will move through to generator interconnection agreement (GIA) negotiations after the Phase III System Impact Study (SIS) reports are complete, reducing the required time to open those negotiations with the transmission owner. This could be an attractive path for projects with no network upgrades required or where the risk of extensive and costly upgrades is better defined. Path 2 can be elected after the Phase III SIS report to further refine the details within the required NUFS prior to moving through to the GIA negotiation. This will add time to a project (90 days), but where there is a major risk associated with upgrade costs, it is a necessary hurdle the project will have to overcome.

A central aspect of the MISO interconnection process improvements, which FERC approved early in 2022, relates to the DPP. MISO allows interconnection customers the opportunity to self-build interconnection facilities at DPP decision point 1. At this early stage, they can choose the option to build, taking some burden off the incumbent utilities.

Efficiencies for the DPP process include:

Interconnection queue reform has both risks and rewards for renewables developers and transmission owners alike, but the goal of a stable, cost-effective energy supply is a shared interest. Since many specific interconnection process changes are still being defined and implementation may be some time off, how can interconnection customers prepare to adopt process improvements? While all large projects present planning and implementation challenges, the complications of developing a renewable energy project are especially great.

Integrating renewable energy generation and storage into the nation’s grid, with associated technologies and dynamic operational requirements, adds complexity to project design, planning and implementation. These projects must stay on top of changing conditions and work smoothly with individual utilities, developers and regional operators. However, several elements offer tremendous potential for renewable energy projects to increase efficiency and lower project risk. Interconnection customers who want to get ahead can incorporate these from the start.

Upfront engagement and planning with the right group can achieve consistency, develop best practices in dealing with process uncertainties, leverage modular solutions or other cost-saving efficiencies, and allow for adaptation as changes occur. Whether undertaking the development of one renewable site or developing a template for multiple renewable projects, planning early is critical to mitigating major risks throughout the project life cycle.

Interconnection customers should identify a collaborative team that brings together every needed skill and service for project success, including project development, cost analysis, siting and permitting, transmission studies, utility coordination, technology selection, and construction. Given the many unknowns and different implementation requirements for the interconnection of renewable energy across the country, establishing an integrated and multidisciplinary team early makes a lot of things possible. Compiling the right skill sets and minimizing team complexity means interconnection customers can be more adaptable to changing process requirements, whether self-building assets or address shifting funding opportunities.

From regulators to utilities, and from local permitting to community outreach, interconnection customers must embrace open and proactive communications with many interested parties. Unintended consequences can be the result of a lack of coordination and involvement with stakeholders, significantly increasing risks to project completion and cost.

Coordination and upfront communication go a long way toward attaining project success by engaging local permitting, utility planners, contractors and communities. When interconnection builders leverage a collaborative and experienced team, they can rest assured that requirements and opportunities to keep all parties involved are baked into the plan and not overlooked.

Over the next decade, the U.S. electrical grid will continue to undergo a major transformation amid economic, social and political pressures. Interests such as decarbonization, electrification and onshoring of manufacturing will make the future of the grid more challenging to plan. Utilities face a daunting challenge to provide consumers with the freedom of an uninterruptible power supply; maintain reasonable power costs amid risks of inflation; and meet key carbon reduction targets in the energy transition.

With the passage of the IRA — and the subsequent financial boost that will come along with grants and tax incentives tied to these projects — the renewable energy market is expanding, and utilities are working hard to cope. Federal agencies and regional utilities have committed to action and are modernizing policies and practices to improve the efficiency of the interconnection process. Now is the time for renewables developers to take steps to assemble the right teams and plans to be an active, efficient and successful part of this growing sector. 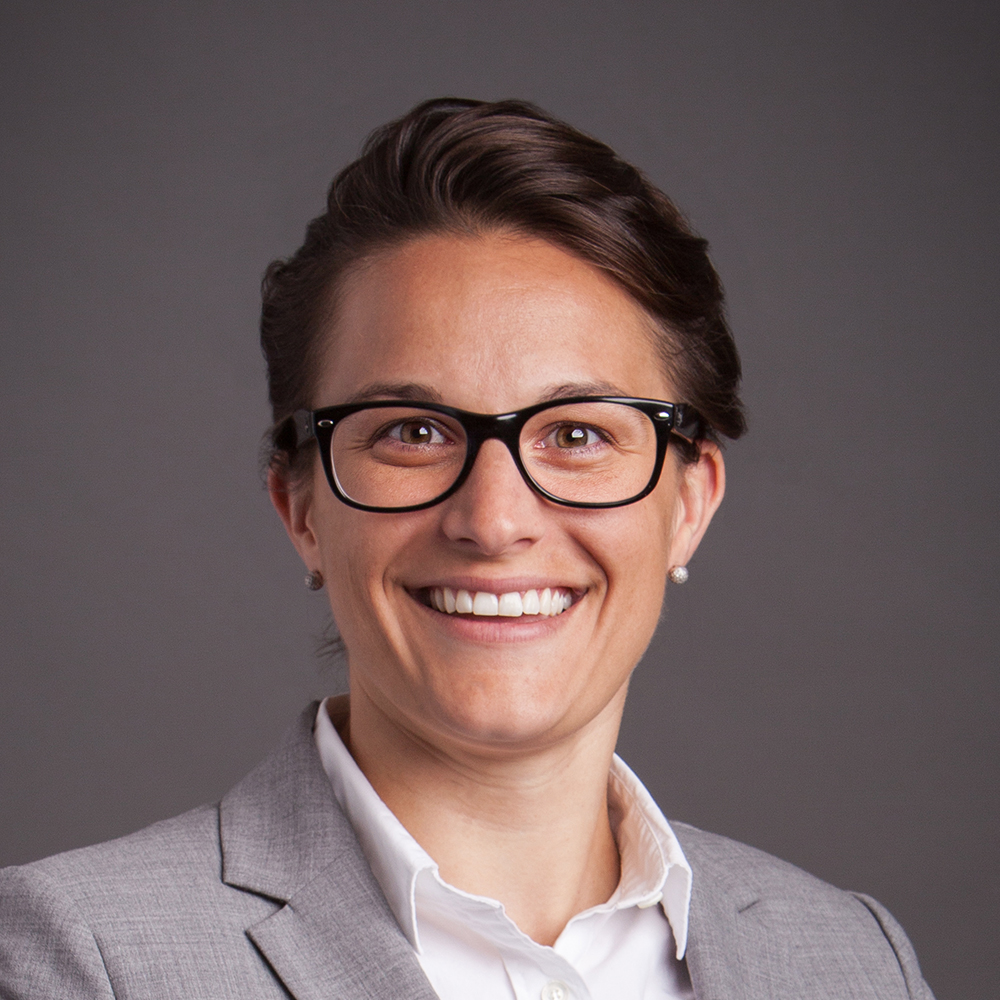