As the number of offshore wind projects continues to grow, addressing grid interconnection challenges is critical for these systems to successfully fit in the evolving power grid. Maintaining system frequency and voltage stability while supplying sufficient short circuit current is key for offshore wind projects to achieve grid stability.

The generation mix across the U.S. is changing as traditional synchronous baseload generation resources such as coal, oil and nuclear retire and renewable, non-dispatchable, nonsynchronous generation provides an increasingly large percentage of demand. The newest renewable juggernaut that will enter the generation mix in this country is offshore wind, a proven technology globally but relatively untested stateside. Proper integration of offshore wind energy into the U.S. electrical grid requires an understanding and consideration of the many unique and challenging characteristics of wind generation and its impact on the grid.

The generation mix across the U.S. is changing as traditional synchronous baseload generation resources such as coal, oil and nuclear retire and renewable, non-dispatchable, nonsynchronous generation provides an increasingly large percentage of demand. The newest renewable juggernaut that will enter the generation mix in this country is offshore wind, a proven technology globally but relatively untested stateside. Proper integration of offshore wind energy into the U.S. electrical grid requires an understanding and consideration of the many unique and challenging characteristics of wind generation and its impact on the grid.

The offshore wind market is blowing away records for new power generation across the world. In 2017, a study by the Global Wind Energy Council showed that 4,331 megawatts (MW) of new offshore wind capacity was installed globally, representing an increase of 95% over the 2016 market. In 2018, the offshore wind market reached 23 gigawatts (GW) in total cumulative installations in 17 markets around the world.

The first U.S. commercial offshore wind farm came online in 2016, with a capacity of 30 MW. In 2020, it is still the country’s only operating offshore wind farm, but there is roughly another 25 GW in the project pipeline, according to a U.S. Department of Energy market summary. Of this, approximately 2 GW is expected to come online by 2023.

With continued state-level activity and many projects under development, attention turns toward how to deal with complexities and challenges to most efficiently bring projects to fruition.

Generating energy from offshore wind and transporting it inland to where it can be used is a complex technical challenge. Beyond the permitting, structural and logistical challenges for manufacturing, transportation and erection, offshore wind utilizes inverter-connected nonsynchronous turbines that require special consideration by grid operators to deliver smooth grid interconnection and stability. Historically, generation sources have been able to provide consistent, dispatchable and controllable energy to the grid via rotating synchronous machines.

Offshore wind turbines, like onshore wind and solar photovoltaic (PV) systems, are asynchronously connected to the grid using power electronic inverters. Wind generation and solar PV utilize advanced high-speed digital controls and are designed to run at maximum capacity to deliver improved performance. These technologies are not, however, intended to store significant energy or provide a large reactive power output without significant facility derating, which presents challenges and increases the risk to the stability of the grid.

As technology evolves and renewable generation programs develop, interconnection study methods must be developed in ways that capture all potential operating scenarios. Offshore wind developers need to understand the potential impacts to the grid and mitigation strategies that may be required; otherwise, unexpected project costs can result from inadequate planning and budgeting. It can be difficult in the study and development project phases to capture these costs and to understand the performance available from different technological solutions when the cost per megawatt hour is being determined for a proposed bid.

The grid operates as a balanced system where generation and load must match at all times. Three primary considerations for grid stability (frequency, voltage and short circuit current) offer challenges but represent the basis of evaluation for interconnecting any new generation, including offshore wind:

Nonsynchronous generation from offshore wind provides limited frequency and voltage response through the power electronic controls and restricted short circuit current up to the limit of the inverter overload capacity.

For offshore wind operations, additional frequency, voltage and short circuit current capability are sometimes required to support the stability of the grid. Several systems can be put in place to address grid stability needs.

Electrical systems in the U.S. operate at 60 hertz (Hz), meaning the alternating voltage and current go through a cycle of positive and negative polarity approximately 60 times per second. Devices connected to this power grid require electric and magnetic fields to operate and transmission lines, transformers, motors, etc., all need electrical current to produce these fields. The power necessary to provide the currents for these fields is called reactive power and is measured in volt-ampere-reactive (VAR). Reactive power is stored in electric or magnetic fields, and this power is absorbed and resupplied back to the system every cycle. Reactive power results in the voltage and current waveforms being out of phase from each other as these electric and magnetic fields charge and discharge.

Reactive power is produced by devices that either inherently, through fundamental physical properties, create a phase angle difference, or through devices that can control the phase angle difference between the current and the voltage. Most devices connected to the grid, such as motors and compressors, consume reactive power. A surplus of reactive power will result in an increased system voltage, and a shortage of reactive power will result in a decreased system voltage. System voltages need to remain within a certain operating range, which varies from region to region but generally must be within 0.95 pu to 1.05 pu.

Active devices would include synchronous machines such as generators, large synchronous motors and synchronous condensers, all of which control the phase angle difference between the voltage and current by varying the strength of the machine field current.

In offshore wind power systems, the long subsea transmission cables can act as large capacitors. The longer and larger the cables, the greater voltage and current will be out of phase and the more reactive power is consumed. This must be compensated for in the design of offshore wind systems, often with the use of compensation equipment onshore at the site of interconnection to the rest of the grid. Compensating for the reactive power consumption of the offshore cables will allow the cables to operate more efficiently and increase the amount of power that makes it onshore.

Large, rotating masses used in synchronous power generators naturally help to control power system frequency to deliver a balance between generation and demand on the grid. The rotational inertia of a synchronous generator minimizes the rate of change of grid frequency during times of changing conditions. Such inertia keeps power flowing for a period that allows for available response and reaction to faults and outages. Achieving a level of required stability for the grid is not so easy for offshore wind plants.

Inverter-based offshore wind power does not have rotational inertia equipped for energy storage. As offshore wind systems and other inverter-based renewable systems are added to the grid and replace synchronous generation, measures must be taken to reduce the risk of diminished frequency response and control.

For offshore wind operations, additional frequency, voltage and short circuit current capability are sometimes required to support the stability of the grid. Several systems can be put in place to address grid stability needs. 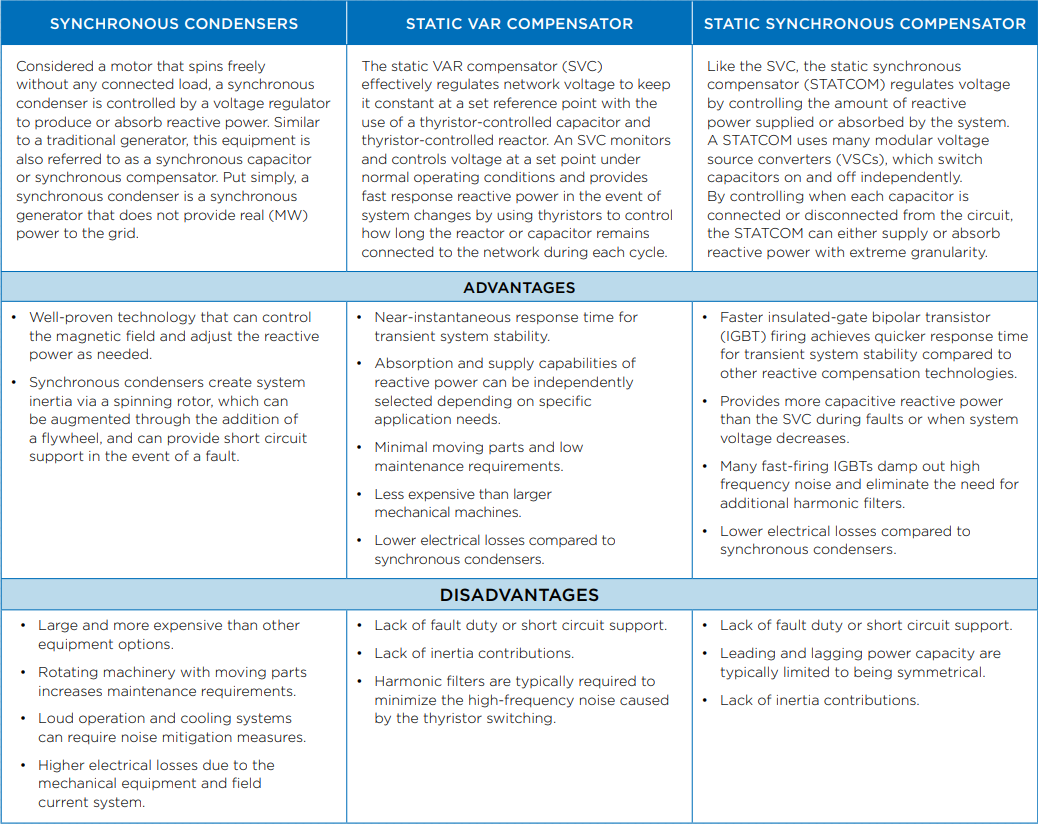 FERC Order 842 has begun to address this new dynamic and requires newly interconnecting generating facilities to install, maintain and operate equipment that can provide primary frequency response as a condition of interconnection.

Planning and analyses are required to create offshore wind systems that compensate for frequency instability. Designing frequency protection and control schemes include the evaluation of alternatives such as synthetic inertial control to provide grid protection and optimal wind generation performance.

To keep the grid stable and maintain proper voltage, enough short circuit capability is required from generating sources. In the event of a fault on the grid, generation equipment must be able to provide sufficient short circuit current to maintain voltage and frequency, so that protection systems can detect and clear the fault from the grid. If a fault remains for too long, or if there isn’t enough short circuit current, the grid could become unstable and cause cascading blackouts as frequency and voltage deviate too far from their nominal operating ranges.

For reliable and safe operation of electrical power, systems must be able to predict and model the generating sources that produce fault current.

Offshore wind farms typically have many turbines, inverters, transformers, reactors and cables associated with the system, as well as additional compensating equipment onshore. Wind turbine generators can operate singly or be networked to deliver varying amounts of power. Turbines must be able to perform at variable speeds that can handle rapid wind speed fluctuations, optimize turbine blade speed and handle power swings.

Careful analysis, study and modeling of short circuit current conditions, fault risks and protection systems is needed for each type of offshore wind generator type being considered. This can be a challenging process given the many different wind generator manufacturer types, commercial software and proprietary software and operating systems used.

With increased project activity and investment, developers must coordinate — or at least be aware of —

the actions and complexities between the many federal agencies and regional, state and local laws. To assist, the Department of Energy (DOE) and the Department of Interior (DOI) Bureau of Ocean Energy Management (BOEM) have worked to create a National Offshore Wind Strategy.

The strategy identifies the challenges within the regulatory process to deliver the stewardship of projects and helps to identify the regulatory agencies leading distinct efforts. Offshore wind design, planning, implementation and permitting continues, however, to be a complex and changing dynamic for projects.

For offshore wind developers and transmission operators striving to deliver new generation that can reliably contribute to the grid, all roads lead to the criticality of producing comprehensive planning studies.

Consistent with Independent System Operator (ISO) and Regional Transmission Organization (RTO) policies and procedures, the integration of offshore wind to the nation’s grid must do no harm. As such, high-quality transmission planning and interconnection studies are required that provide insight from analyses and models to guide the planning, development, design and implementation of offshore wind projects.

Offshore wind planning studies must consider more permutations of analyses and provide more robust screening and evaluation to assure integration to the grid:

The accelerated growth of offshore wind and renewable generation is challenging the country’s already evolving power grid and its many stakeholders. To guide U.S. offshore wind projects, developers and public operators need to thoroughly understand the potential impacts, risks and needed compensation for successful grid integration of this new generation source.

This will require the skilled application of diverse technical resources and strategies to develop comprehensive solutions that minimize grid impact onshore. Projects in all phases of development will benefit, but it is especially crucial to projects earlier in the development pipeline.