Working in the oil and gas industry is inherently hazardous. Whether you’re dealing with crude oil, natural gas liquids (NGLs), refined products or electricity, safety must be the priority. Increased awareness of arc flashes requires a new focus on prevention.

In the past, safety management for electrical workers focused primarily on electric shock, electrocution and fire from electrical systems. Over the past two decades, however, the emphasis has expanded to include hazards associated with electrical arc flashes.

In the past, safety management for electrical workers focused primarily on electric shock, electrocution and fire from electrical systems. Over the past two decades, however, the emphasis has expanded to include hazards associated with electrical arc flashes.

As electrical systems have become larger and more complex, there has been a dramatic increase in exposure to electrical hazards and arc flash hazards in particular. Greater awareness of these hazards has led to the development of better tools and technologies to quantify and mitigate them. In addition, NFPA 70E: Standard for Electrical Safety in the Workplace provides guidelines for performing risk assessments to determine the severity of the hazard and identify the proper work practices and personal protective equipment (PPE) required for interacting with electrical equipment.

This focus on mitigating the impacts of arc flash events using safe work practices and PPE has significantly decreased the number of workplace electrical fatalities in the United States. Nonetheless, the fatality rate from electrical contact or electrical discharge remains 3.8 times higher in the U.S. than in the United Kingdom (Floyd & Floyd, “Bringing Attention to Residual Risk: Psychology of Warning, Administrative Controls and PPE,” p. 96). 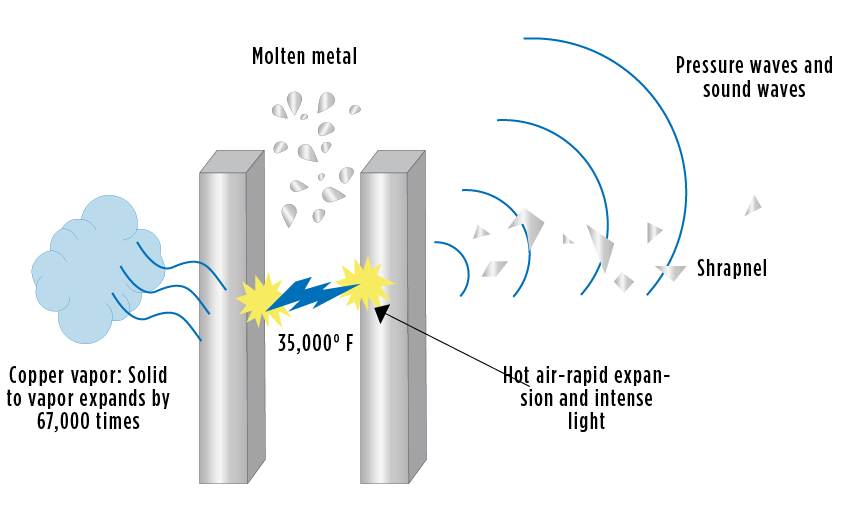 The lower rate in the U.K. is likely due to decades of emphasis on risk assessments and prevention through design by applying the hierarchy of controls. Today, we need to adopt a similar approach — one that focuses on eliminating or reducing the severity of the arc flash hazard itself, rather than simply mitigating its impacts on personnel. Integrating arc flash prevention from the earliest stages of project design is the solution.

WHAT IS AN ARC FLASH?

An arc flash is a release of incident, or thermal, energy from an electric arc fault. It occurs when electric current flows through an air gap between conductors and is most often caused by accidental contact between tools and electrified surfaces. The probability of an arc flash also depends on numerous variables that differ from installation to installation, including equipment condition, contaminants in the air and exposure to moisture or animals.

Though arc flash incidents are less common than many other incidents — both electrical and nonelectrical — they are much more likely to cause severe injury or even death. An arc flash typically lasts for a short duration but may generate temperatures as high as 35,000°F and a blast with a force of up to 1,000 pounds. The intense heat of an arc flash can cause severe burns, while the arc blast may knock the victim backward, destroy the electrical box or other equipment, and send shrapnel flying.

According to Electrical Safety Foundation International (ESFI), in 2016 there were 154 electrical fatalities and 1,640 nonfatal electrical injuries in the workplace, with most occurring in construction. Statistics also indicate workers are more likely to be injured if they are less experienced or are working long hours, due to the human performance factor. Even so, current risk assessment factors require human interaction to mitigate the hazard.

While it isn’t always possible to eliminate all electrical hazards or even substitute a lesser hazard, engineering controls that do not require human interaction can be used to bring the hazards to an acceptable level of risk.

We all engage in risk assessment every day, and everyone’s risk tolerance is different. Whether we’re making decisions about driving a car, skydiving or visiting another country, we weigh the severity and probability of the risk against the outcome. If the risk is too high, it must be reduced to an acceptable level.

For example, speed limits and seat belt laws were introduced to help reduce the overall risk of car travel, and they have been largely successful. According to the National Highway Traffic Safety Administration (NHTSA), the annual rate of traffic fatalities has declined for decades.

It’s important to note that these safety practices reduce the hazard by decreasing the severity of a potential accident, but do not prevent the accident in the first place. These practices, which are considered lower-order controls, also require human action to put on the seat belt or obey the speed limit.

In the auto industry, new higher-order engineering controls like — blind spot monitoring, adaptive cruise control, lane departure warnings, automatic breaking and applications that prevent texting while driving — are being introduced. Rather than simply reducing the severity of accidents, these engineering controls help prevent accidents from occurring. They are much more effective at reducing overall risk, and they don’t require human action to implement. 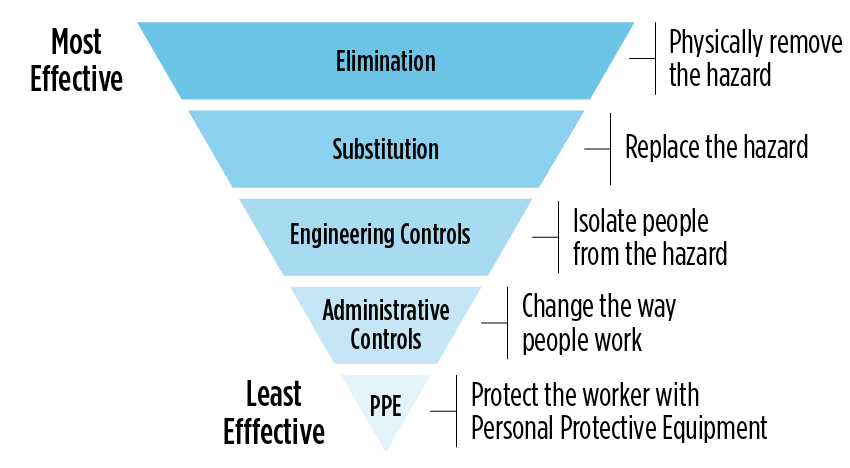 An increase in the application of such higher order controls is needed in the oil and gas industry as well.

Every terminals and pipelines project should include a risk assessment, or process hazard analysis (PHA). The PHA will:

Once a hazard is identified, the owner must determine what level of risk is tolerable. If the risk is acceptable, no action is required. If it is unacceptable, either the probability or the severity, or both, must be reduced using the hierarchy of controls.

Elimination, substitution and engineering controls are considered higher-order controls and are most effective at reducing arc flash risk. They are implemented during the design phase and do not require human intervention during work tasks. The remaining lower-order controls have been found to be far less effective, in large part because they require real-time knowledge, consistent attention and decisive action from both supervisors and workers.

Since ANSI Z10 was published in 2005, safety management experts have encouraged the disciplined application of higher-order controls to reduce electrical hazards. But adoption of this approach has been inconsistent. With publication of NFPA 70E 2018, which added sections referencing ANSI Z10 and hierarchy of controls, this is beginning to change.

As the oil and gas industry has started paying closer attention to the efficacy of various controls, it has become apparent that although work practices and PPE are good tools, they are subject to human error. The better option is prevention through design.

Too often, oil and gas projects are designed and built before arc flash prevention is considered. This is understandable, since accurate, final incident energy (arc flash hazard) calculations require detailed and precise information that often is available only at the end of a project’s design or even after construction. However, this is not the most effective approach.

Systems created in this way frequently may require significant modification to equipment or operating limitations to address the arc flash hazard. Unfortunately, the ability to positively impact the system currently is very limited. From both a cost and effectiveness standpoint, it is far better to implement arc flash hazard preventions during the design phase of the project.

Each project and facility has unique components that contribute to the risk associated with electrical equipment, but all projects benefit from considering arc flash prevention during the design phase. Figure 3 illustrates how the different systems play a role in hazard prevention or mitigation. 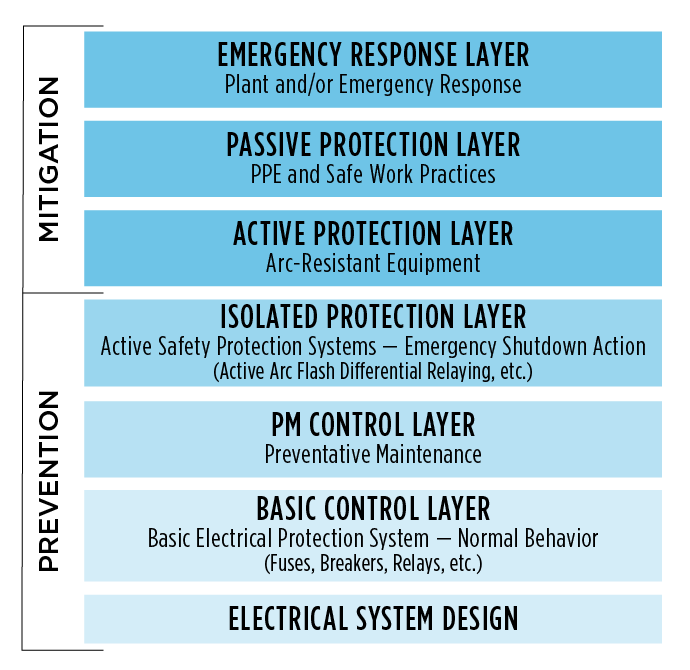 As the system begins to age, preventative maintenance is needed both to keep the system operating as designed and to prevent contaminants, such as dust or deteriorating insulation, from increasing the likelihood of an electrical system incident. Active safety protection systems also can be used to prevent the hazard from becoming more severe, but they aren’t present in every electrical system. (Preventative maintenance and active safety protection systems are pieces that are missing far too often.) Other protective layers do not prevent electrical incidents, but simply mitigate the hazard. For example, arc-resistant equipment does not prevent the arc, but contains the majority of the energy and redirects it to a safe location. Similarly, PPE, safe work practices and emergency response reduce the impact of an incident, but do not decrease the chances of an event occurring.

The severity of an arc flash hazard depends on numerous variables, but short-circuit current, distance and time play an outsize role. When prevention starts during design, engineers can implement engineering controls to optimize the relationship between these factors.

Short-Circuit Current
The short-circuit current for a given power system is dependent on system impedances and source fault currents. These values can only be influenced during the design process, when you’re identifying your sources, selecting your distribution equipment and sizing the transformers and cables. Early planning allows you to optimize these values and ultimately leads to hazard prevention.

Distance
The distance between a worker and a hazard is a key variable in the calculation of the hazard’s severity, but it cannot easily be changed. Such distances are based on industry standards and equipment construction. However, engineering controls can be implemented to keep workers away from equipment while still allowing them to perform many of their daily tasks. These include remote operation of breakers and switches, remote racking, remote diagnostic capability, and sensors to identify issues or improve preventative maintenance.

Exposure Time
The severity of an arc flash hazard decreases when the exposure time is reduced. Exposure time is directly related to the clearing time of the protective devices, and this is where you can have the biggest impact on preventing the hazards of arc flash. Technologies such as differential relaying, zone-selective interlocking and active arc flash detection can drastically reduce the time it takes to recognize and clear a fault. The use of arc-resistant equipment also can reduce the severity of a hazard.

Other Preventative Measures
The technologies described above can drastically reduce the risk of arc flash incidents. Yet even standard fuses, breakers or relaying can be optimized to minimize risk, if properly designed. For example, the clear majority of arc flashes start as single line-to-ground faults. Therefore, the introduction of an impedance grounded system can eliminate arc flashes from ground faults, drastically reducing the probability of the event ever occurring. The probability of arc flash also can be reduced by allowing only qualified electrical workers to perform the work and by implementing a comprehensive preventative maintenance program.

Most of these technologies are not new; still, because there is not always one technology that meets the needs of a given project, it is essential to identify and incorporate an effective solution early in the project.

Arc flash hazards have been a known problem in the oil and gas industry for years, and numerous strategies have been undertaken to mitigate the impacts of arc flash events. More recently, NFPA 70E 2018 has put new emphasis on eliminating arc flash hazards altogether using the hierarchy of controls.

Effective arc flash prevention requires addressing the risk early, during the design stage of terminal and pipeline projects. The earlier preventative concepts are introduced into the project life cycle, the more effective they will be from both a safety and cost perspective.

A qualified partner should recognize that safe work cannot be performed if the initial design is unsafe. The qualified partner should have experience in design, construction and, most importantly, safety management systems. By bringing all types of arc hazard prevention experience under one roof, a qualified engineer-procure-construct (EPC) company allows oil and gas companies to eliminate the complications of working with multiple vendors. A cohesive team also efficiently integrates safety systems and anticipates potential errors, thereby enabling projects to be completed faster and on budget.