The electrical transmission system in the Wood Buffalo region required reinforcements to provide a reliable supply of electricity for years to come. AltaLink benefited from an innovative, cost‑effective structure design and teamwork on an aggressive schedule to develop and energize facilities in the challenging northern Alberta environment.

AltaLink owns and operates the electrical transmission system that serves about 85% of Alberta’s 4.4 million residents and industries including agriculture, petrochemicals and manufacturing. The Alberta Electric System Operator (AESO) hired AltaLink to undertake system improvements to support growth in electricity demand.

To provide reliable and robust electrical power supply and capacity to serve the oil and gas industry as well as communities and businesses in the Wood Buffalo region of northern Alberta, AltaLink required several modifications to the substations, transmission lines and supporting infrastructure. A three-phase transmission development effort was identified, including a final phase that would develop a substation and transmission line at Ipiatik Lake. Muskeg vegetation, hydrological patterns and permafrost all presented both landscape and environmental engineering challenges, as did restrictions on prime caribou habitat.

Burns & McDonnell was selected to provide the engineer‑procure‑construct (EPC) services for the Ipiatik Lake project. After consultation with local stakeholders, the project began in December 2013 in the remote northern Canada location.

Burns & McDonnell was selected to provide the engineer‑procure‑construct (EPC) services for the Ipiatik Lake project. After consultation with local stakeholders, the project began in December 2013 in the remote northern Canada location.

After evaluating new technologies in the early phases of the project, we put forward a proposal to design and supply a new tubular steel double‑circuit horizontal H-frame, instead of lattice towers. This was more efficient and cost-effective than the standard AltaLink lattice towers that had been proposed for transmission line structures. Also, the design was estimated to save $95 million Canadian dollars (about $72 million in U.S. dollars) in overall cost, partly by mitigating construction risks associated with the muskeg terrain.

The final phase of the project was in a remote area in northern Alberta, near Ipiatik Lake. For more than two years and in all seasons, we coordinated around reduced-daylight working hours, frozen ground and an extreme winter construction environment of -50°C (-58°F) weather.

In addition to the installation of transmission lines, a new 240/138-kV substation was constructed at Ipiatik Lake. Seven existing substations in the highly remote Alberta oil sands area also were modified.

The project presented a variety of challenges that needed to be addressed to remain on schedule and on budget. Strong project controls, attentive permitting work and careful consideration in scheduling despite climate and terrain conditions helped in that process. 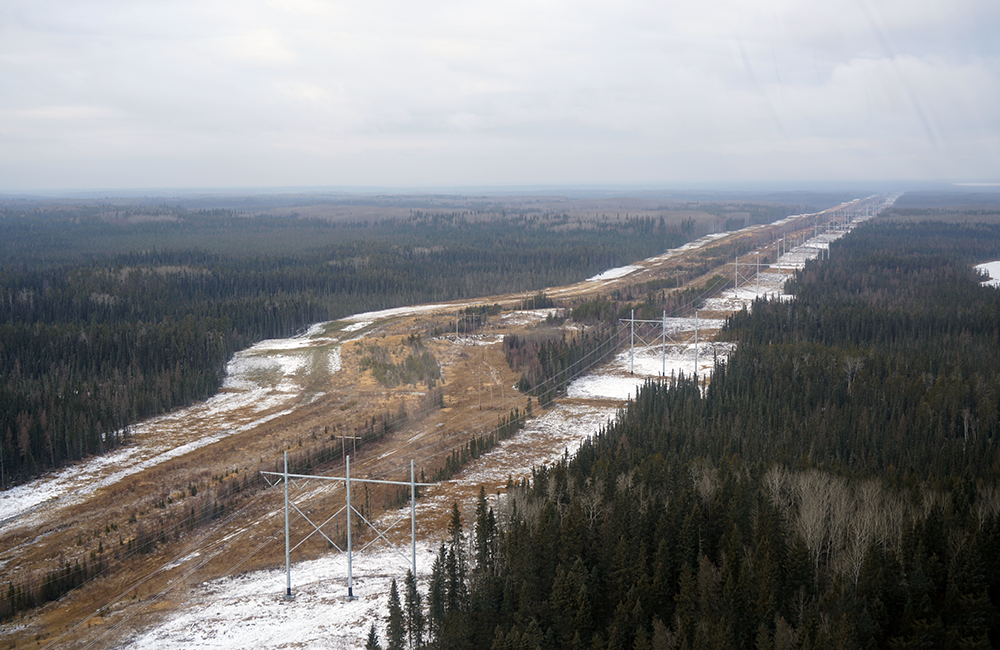 We designed unique transmission structures that reduced the construction schedule, eliminating the need for one winter construction season, and ultimately delivered the project on schedule and under budget. Compared to typical lattice towers, our structures created smaller footprints and did not require large temporary work areas, which minimized vegetation clearing. Our work was designed to minimize disruption to caribous during the sensitive calving season; it also preserved the caribou habitat by minimizing right‑of‑way clearing.

The Ipiatik Lake project was the first AltaLink project of its type and magnitude to be completed and energized on schedule in 12 years. From project timelines to remote locations, success was realized through strategic project decisions and client collaboration.

AltaLink honored the Burns & McDonnell team’s success on the project with its 2013 President’s Award of Excellence.